Today DSPRobotics launched FlowStone V3.04! Some of the highlights include a new DLL system allowing you to make your own components using external dlls! This means you can integrate your own high speed code written in C for example, yet keep it private, effectively making a plugin for FlowStone.
There is also a new feature for education allowing you to make limited tool boxes for lesson planning so the tool box will only contain the components needed for that particular project. 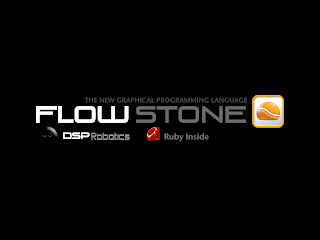 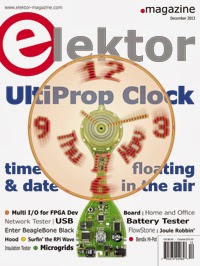 Here's the PDF of the article:
Here


This is good timing as MikroElektronika have just release an exciting new HID usb board called the PIC Clicker for $19 USD that works with FlowStone: 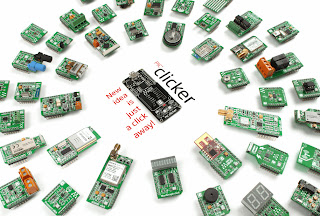 This board has lot's of add on boards that can be used via the 'PIC Clicker' to interface with FlowStone via USB.

If you have any questions email us at: support@dsprobotics.com

Posted by DSPRobotics at 14:56 No comments:

Posted by DSPRobotics at 03:29 No comments:

Today DSPRobotics launched FlowStone V3.03! Some of the highlights include a new DMX 512 disco/stage lighting control module, and new HID (Human Interface Device) module for connecting to games controllers and comunicationg with external microprocessors like the popular PIC chips.


Posted by DSPRobotics at 03:41 No comments:


FlowStone from DSPRobotics recently won the 'Outstanding Performance Award' at the Ruby awards in Fukuoka Japan.

The entrants were judged by Matz the creator of the Ruby programming language as well as an expert panel, one of the main attractions of FlowStone was it's applications in education and robotics. 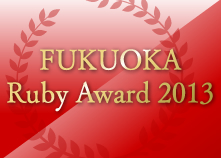 This prestigious prize came with a cash prize and a trophy!
Posted by DSPRobotics at 03:26 No comments:

Here's the video from RobotShop for the launch of the 'Servo Erector Set' powered by FlowBotics Studio:

FlowBotics Studio uses a combination of graphical and text based programming to allow for the easy creating of robotic code and applications.

Posted by DSPRobotics at 09:18 No comments:

RobotShop & DSPRobotics release Flowbotics Studio on the 24th of May - yes that's tomorrow! 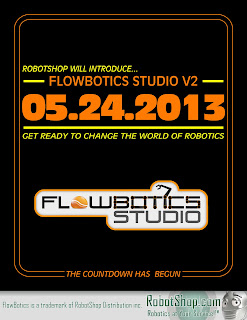 The waiting is over...
Posted by DSPRobotics at 07:21 No comments:

Mirabel, Quebec, Canada. January 22, 2013
RobotShop announced today that they have formed a strategic partnership with DSPRobotics to redefine the software “FlowBotics Studio” to bring it to the next level with a plan to launch version 2 on May 24, 2013.

In its current form, the FlowBotics software offers users a visual interface for controlling the popular LynxMotion robot arms. This software will stay as is and the name changed to “ArmControl”. ArmControl will become one of many demo programs within the new “FlowBotics Studio”, which will be a much more versatile software suite allowing users to easily control and experiment with many robotic platforms and/or hardware without prior programming or robotics experience. The new FlowBotics Studio will incorporate pre-made demo programs created using the FlowBotics / FlowStone software.

The FlowStone software, on which FlowBotics is based, uses a combination of graphical and text-based programming. Applications are programmed by linking together functional building blocks called “components”. Events and data flow between these components as the application executes. All this happens instantly - there's no compiling; the application runs as it is built, making development an extremely rapid process. Executable programs which run on their own can also be created.

“Following the recent acquisition of Lynxmotion, a leading manufacturer of educational robot kits, we knew we needed a powerful robotic software to help customers easily program, control and experiment with robotic platforms,” said Mario Tremblay, founder and CEO of RobotShop. “DSP Robotics was the best possible partner for an alliance based on the potential of their software, their skill and knowledge as well as their desire to further expand into the robotics market. FlowBotics Studio is a modern and powerful software suite and will complement the Lynxmotion line of robot kits perfectly. The vision is not only to use FlowBotics Studio for Lynxmotion kits; with time we plan to integrate additional robots and parts from RobotShop’s ever-growing product selection. You will be able to attach sensors and motors to a platform and have it running within minutes, or even remotely control and communicate with your Roomba or other domestic / professional robot. The vision is to offer one single robotics software suite capable of addressing all your needs, along with one source to purchase all your physical robots and parts. The missing part of the robot revolution has always been the software and the ability to easily develop complex programs. We envision FlowBotics Studio being this stepping stone”.

“FlowStone” is a proprietary computer programming language developed by DSPRobotics, a division of Outsim Ltd. This language was first commercialized in 2006 for the music industry to help create plug-ins. It has recently been adapted for the robotics/engineering/education market where Flowstone allows users to create their own stand-alone applications using its in-built components and modules, including the Ruby programming language. By building a hierarchy of modules, the user can quickly create complex behaviours to program almost anything.

“We have made engineering programing languages for over ten years now and our most recent language, FlowStone, was used to create the original Flowbotics. This is now being used by over 12,000 students via Project Lead The Way to teach robotics,” said DSPRobotics CEO Carl Owen. “Working with RobotShop to make this new and exciting generation of Flowbotics Studio, which actually has the complete FlowStone software built-in, makes the perfect software + hardware combination. We make programming languages that support literally thousands of hardware interfaces and robotics kits, and RobotShop not only owns LynxMotion, one of the industry leaders in the robotics field, but also sells hundreds of other hardware interfaces that will also work with FlowStone inside Flowbotics Studio. In the future this will mean that when you buy a robotic kit or hardware interface from RobotShop you will not only have a high-level application to control your hardware but also be able to drill down into the source code and make your own modifications and enhancements. We are very excited about working with RobotShop and look forward to a long and prosperous relationship.” 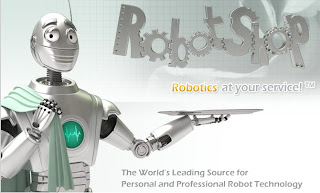 DSPRobotics is a leading software development company specializing in Graphical Programming Languages for engineering, education, and the music industry with over 10 years of experience in creating computer programming languages that are used all over the world, most famously the FlowStone programming language.
For more information on DSPRobotics, please visit http://www.dsprobotics.com 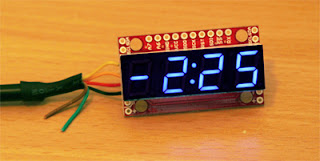 Posted by DSPRobotics at 04:04 No comments: