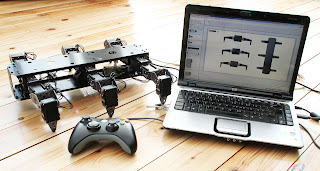 
Here's a short video of this six legged beast coming to life:

Posted by DSPRobotics at 13:36 No comments:


UK based DSPRobotics today released Version 3 of their popular FlowStone graphical programming language. This version marks a cornerstone in the company’s development as it now includes the entire feature set from their sister software SynthMaker as well as a host of new features, developments, and expanded Ruby Code support. 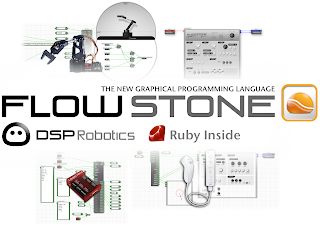 As of today both products will live on under the FlowStone brand and continue to support an ever expanding market including Rapid Software Development, Engineering, Robotics, Test and Measurement, Education, Home Automation, Audio/Video Signal Processing, and Music plug-in applications.

Posted by DSPRobotics at 02:11 No comments:

Exciting times at DSPRobotics, V3 of their FlowStone software is announced for September/October 2012.

This marks the first version of FlowStone to fully incorporate the features of their sister application SynthMaker. FlowStone V3 will become the new replacement for SynthMaker and not only continue with the rapid development platform for EXE applications but also incorporate the VST plugin export features for making digital audio plugins.

FlowStone can be tried for free here:

coming soon in FlowStone are several new modules to talk to Home Automation devices. One of the more interesting ranges is the Netvox range of wireless Zigbee interfaces.

These include things such as:

Here is an article comming out in robot Magazine about FlowStone and Home Automation: 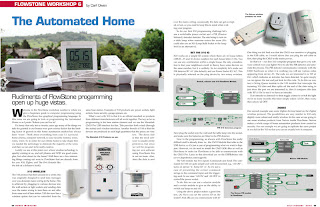 There is also support for the Owl energy monitors and the existing support for Marmitek X10 products.
Posted by DSPRobotics at 23:12 2 comments:

Here's the XBugBot Robot as featured in Robot Magazine: 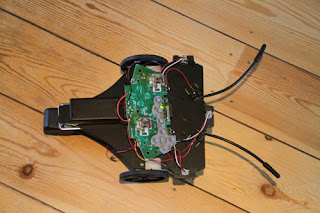 This is an autonomous robot made by hacking an Xbox controller!

Here is the PDF of the article

Here are the Project Files and Manual


Posted by DSPRobotics at 15:10 No comments:

MIDI to Ruby to MIDI

New -  the Ruby module in FlowStone now supports MIDI in and out. This allows you to make accurate timing for things like sequencers etc.

Posted by DSPRobotics at 12:06 No comments:

New Audio to Ruby & Ruby to Audio Modules in FlowStone

Yes you can now analyse or create audio inside the FlowStone Ruby Module.

This simple project creates a sine wave inside Ruby and sends it to a real time scope and out to the sound card running at 44.1Khz
Posted by DSPRobotics at 09:34 No comments: 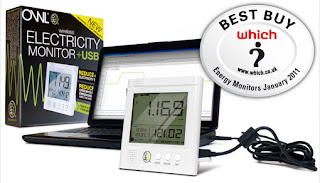 Owl USB with LCD Display
OR 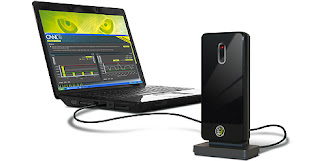 Owl USB Without Display
Simply connect the wireless current sensor to your incoming mains cable and the Owl usb device to your PC and read the data directly inside FlowStone: 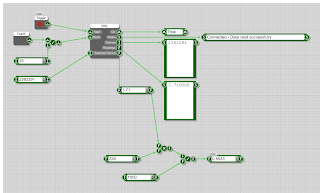 The FlowStone bit is at arounf 17.26
Posted by DSPRobotics at 03:53 No comments:

DSPRobotics are the Platinum Sponsors of the 2012 BotBraw Robot competition in the US!

There are eight events during the completion where team get to compete against each other:

Earlier today the new FlowStone V2.01 was released. This new version builds on the success of the new Ruby programming components by adding several new Ruby based GUI elements. 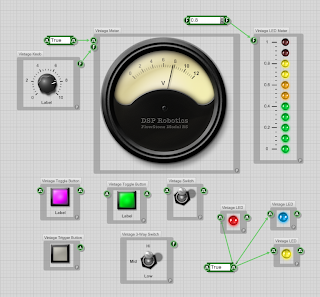 for more information visit: http://www.dsprobotics.com/flowstone.html
Posted by DSPRobotics at 13:49 No comments: 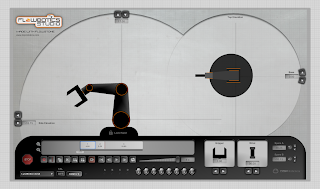 This incredible little application visually represents a real-time robotic arm on screen that can be programmed to perform various tasks. These movements are simultaneously output to the real arm that mirrors the software.

For more information: http://www.dsprobotics.com/support/viewforum.php?f=71
Posted by DSPRobotics at 04:23 No comments: